What does LTTE mean in Politics?

This page is about the meanings of the acronym/abbreviation/shorthand LTTE in the Governmental field in general and in the Politics terminology in particular.

The Tamil National Army also known as the Liberation Tigers of Tamil Eelam (LTTE) were formed after the failure of many years of peaceful demonstration by Tamil leaders in order to win their freedom from the successive Sinhala majority governments, which showed no concern for the Tamil grievances. Under the leadership of Mr. Velupillai Pirabakaran, the LTTE was founded on May 5, 1976 to achieve what had become unachievable by peaceful methods in over 28 years.

Find a translation for Liberation Tigers of Tamil Eelam in other languages:

What does LTTE mean?

Popularity rank by frequency of use

How popular is LTTE among other acronyms? 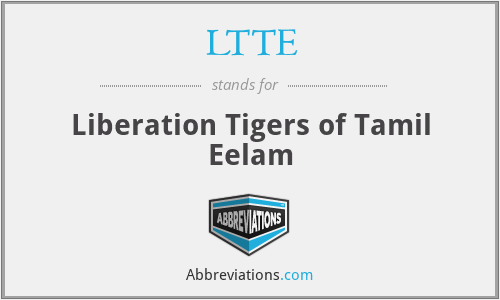 Use the citation below to add this abbreviation to your bibliography:

Discuss this LTTE abbreviation with the community:

Thanks for your vote! We truly appreciate your support.